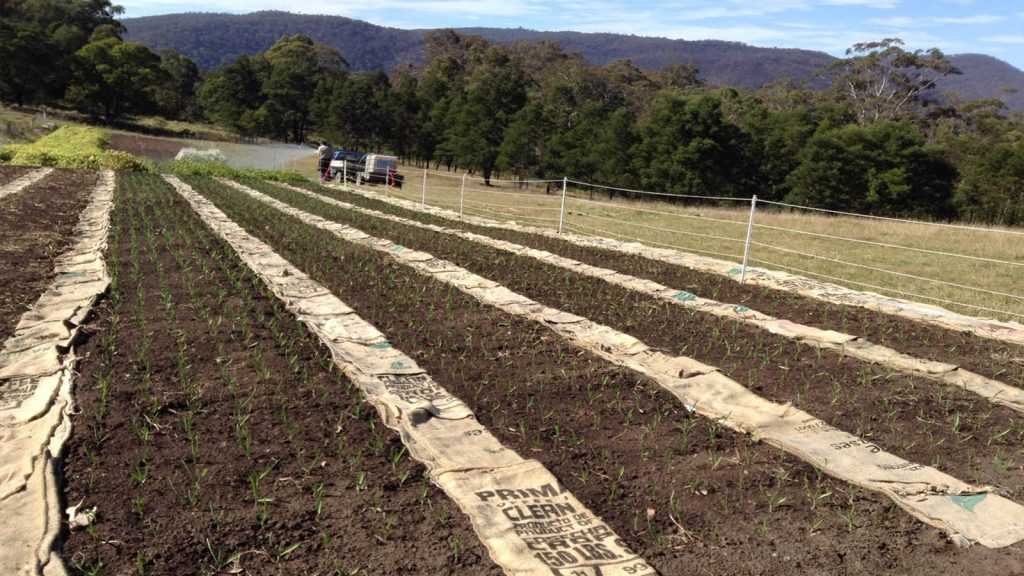 Ontos Farm was first settled by Fred Koch. Fred was 30 years old when he purchased this beautiful remote property in 1974. He is originally from the USA and before he immigrated to Australia he was a school teacher, a salesman for a financial institution and a hippie – in that order. He has always felt a connection with Australia, even as a child. He has been here for 44 years now and has no plans to live elsewhere.

When Fred came in 1974 he was the only person living in the valley. All the previous settlers had either died or moved away and the whole valley was owned by various absentee farmers. As a result of astute investments mentored by his father, finances were not a problem. He purchased parcels of land as they became available in the valley, held them until someone nice and alternative came looking and sold to them to cover his costs only.

When Fred arrived in Australia he was a single man but soon formed a relationship with an Australian woman. There was a four bedroom house on the property and they put notices in the alternative media of the day offering room and meals in exchange for help on the farm. The offer proved popular and the house was soon full of healthy happy folks. Fred is an organic gardener and since the shopping town was 100kms away it was necessary to grow as much nutritious food as possible.

When the house reached full occupancy (around 10-12 persons) and the finances were available, an intentional community was started. A main building with kitchen and dining area, toilet and shower block, six cabins and up to 10 caravans were put into place. You could call it a hippie community with the proviso that no drugs or alcohol were allowed. People came and went for different lengths of time and the population varied between 40 and 60.

In 1980, at the request of Fred, his spiritual teacher, Swami Satchidananda, visited the community. He was very well liked and many residents were already following some type of spiritual path. Swamiji was therefore asked to be a guide to the community and for the next five years the community was known as the Satchidananda Ashram. The population of residents was around 60 and retreats on spiritual and health matters were common. A beautiful meditation and yoga hall was constructed and a 16 unit motel style building started for visitors.

The finances were running out. Up until now there had been no need to secure an income but that was changing. In order to earn an income, a sandal making enterprise was established in Melbourne. A professional shoemaker was employed and several people associated with the ashram but living in Melbourne made a very good product. Nobody who was capable of overseeing the sandal enterprise wanted to live in Melbourne. However a new resident at the ashram offered to run the business and did so for a bit over a year until it became apparent something was amiss. He had evaporated funds and created debts of over $1 million. The property was collateral for the business and the bank initiated foreclosure. Things looked grim. Most of the residents left.

As the bank was just about to possess the community assets, Fred’s brother died leaving him almost the exact amount of funds to pay all debts. This was done.

Now there existed the buildings and infrastructure of a once thriving ashram but only Fred, his partner, three children and six remaining residents.

What to do now?

After a few weeks it was decided to use the infrastructure to create a health retreat. This was started but was tough without money. Slowly the remaining residents left and it was up to Fred, his partner and three small children to carry on.

Soon two former residents returned to help. They went to the Satchidananda Ashram in the USA and trained to be qualified yoga teachers. Upon their return they helped in all ways necessary from cooking, managing, cleaning, massage, yoga, etc. They remained for many years and became experts in their various fields. Ontos Health Retreat as it was known, would not have been so wonderful without them. People still connect back with us, telling us how much their lives were benefited by their experience of Ontos.

In December 2000 the main building was destroyed by arson. Shortly afterwards the man responsible returned and beat Fred to a pulp, literally. Things were again grim.

Aside from the burning of the main building, Fred and his partner’s marriage burned as well. Fred and a naturopath friend were planning to rebuild and create a natural healing centre for cancer. A start was made but in his weakened condition Fred found it a challenge.

The Tibetan Buddhist Society of Canberra approached with an offer to buy the facilities to create a Buddhist retreat centre. It sounded like a good purpose for the facilities so 40 ha and the infrastructure was sold to them. The centre is still in operation (www.sakya.com.au/siba).

Meanwhile Fred learned how to heal himself and slowly recuperated. Eleven years ago he met a woman attending a retreat at the Buddhist centre. The rest is history.

After his recovery and with the great help of his wife, Neroli he has become a simple and ethical farmer. At this point in time organic garlic is grown and Fred is attempting to interest farmers in growing hemp for food. A separate part of their home has been converted into a B&B listed on Airbnb offering clean beautiful accommodation with optional yoga classes. The plan is to further develop the yoga aspect of Ontos once again and perhaps work in with the Buddhist centre for the same purpose.

Life goes on! Life is good!